Another good meeting three new members and about twenty regulars very good for August as there is always a downturn due to holidays.
One of our members Barry was going to give us a demonstration on off centre turning but unfortunately he was stuck on a job in Cornwall.At five O clock I had the message that he was just not going to be there which put me on the spot a bit as I was planning to have a lazy evening watching Barry.
Anyway as that was obviously not going to be I jumped into the breach and showed the members how to make an off centre goblet.
We had another lathe set up for them that wanted to do hands on but everybody seemed more interested in how to make the goblet.
Most off the members were up and down getting a closer view and asking questions
I have been a little concerned whether we are doing the right thing doing a teaching demo every month although there is always at least another lathe for hands on.
The general feeling from the members seems to be that they benefit from being shown different techniques and they are then able to go away and practise what the have seen,
These evenings are very relaxed and the members tend to gather around the demonstrator  rather than just sit and watch wich is good.
We have decided to have our Christmas meal in December this year and Sue is sorting it out with Brent house as all the members said they enjoyed it there last year.
In the future we are going to have an extra meeting each month in my workshop but the numbers will be limited and we have started a rota.
Because of all the extra facilities on hand members will hopefully benefit greatly.
We now have a large screen television available to us at the centre thanks to Ken Hindle all we have to do now is work out how to use it with a camera.This will be a big asset on our teaching demos as we will then be able to see a lot more detail.
The table was a little bit sparse this month as most members have been busy but Hopefully we we will see an improvement next month. 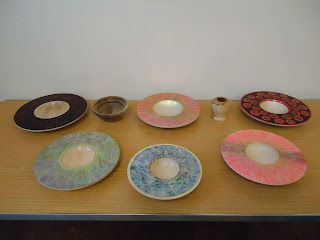 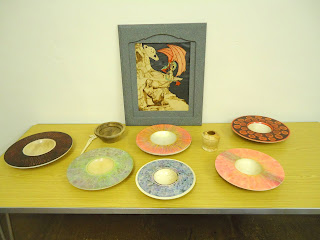 Posted by George Foweraker at 11:34 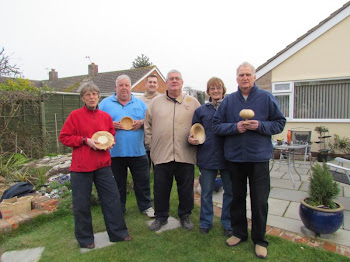 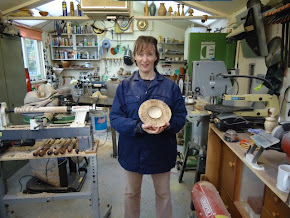